Skip to content
Hon'ble Chief Minister Launched "Sikkim Garib Aawas Yojana". For more details click News and Press Release under Recent Updates, SRLM and MGNREGA Convergence Guidelines, please click on Guidelines under Latest Update Section, Directives for measures to contain spread of COVID19 during lockdown period while resuming MGNREGA works click here, , DO and DON'T For execution of Rural Development Works in Sikkim please click here, Jal Jeevan Mission guidelines , please click on guidelines under Latest Update section
Hon’ble Chief Minister, Shri Prem Singh Tamang launched the Sikkim Garib Awaas Yojana and Chief Minister’s Garib Awaas Yojana at Manan Kendra, on 8th October 2020. The programme was organised by Rural Development Department, Government of Sikkim.
Present in the function were Hon’ble Minister for RDD, Shri. Sonam Lama, Hon’ble Cabinet Ministers, MLAs, Advisors, Chairpersons, Chairmen, Zilla Adhyakshas, Upadhyakshas, Panchayats, Chief Secretary, Heads of various departments, senior officials of the line departments, BDOs and beneficiaries.
During the programme, one beneficiary each from 32 constituencies were provided with allotment order for Sikkim Garib Awaas Yojana(SGAY).
Subsequently, one beneficiary each from 32 constituencies were provided with the first installment cheque of Rs 20,000 for house upgradation during the programme.
Likewise, one beneficiary each from 32 constituencies were also handed over allotment order for GCI sheets.
It may be mentioned here that the SGAY house will be a single storey RCC structure which will consists of a living room, two bedrooms, kitchen, toilet along with furnitures and a television.
Similarly, Chief Minister’s Gareeb Awaas Yojana will be a RCC framed structure with GCI sheets roofing over tubular steel truss and brick wall partition. The house will consist of a living room, kitchen/dining, two bedrooms, toilet and a front porch.
The Hon’ble Chief Minister in his address mentioned that the Sikkim Garib Awaas Yojana is an initiative of the State Government to facilitate housing for poor and to improve the quality of the life of deserving households by providing basic amenities. He further added that a total of 100 beneficiaries from each constituency will be benefitted under this scheme. The house under SJAY will be constructed at an estimated cost of Rs. seventeen lakh fifty one thousand including furnitures and a TV.
The Chief Minister also informed that the Chief Minister’s Garib Aawas Yojana (CMGAY) has been envisaged as an immediate relief to the senior citizens who are staying without any immediate support or family members.
He further added that these schemes of the State Government aimed to bring about qualitative improvement in the housing status of the poor and will result in achieving the status of a kutcha house free State.
The Chief Minister also informed that the State Government is planning to bring the scheme for urban settlers under Urban Garib Awaas Yojana in near future.
Speaking further on house upgradation, the Chief Minister informed that a total of 400 beneficiaries from each constituency to be provided with house upgradation of Rs. 50000. He added that Rs. 20000 to be provided in the first phase and the remaining amount will be provided in the second phase. He also directed the concerned officials to expedite the process of distribution of the cheques of the first phase before dasai festival.
He also mentioned that the State Government will also be providing 30 GCI sheets to 100 beneficiaries each from all 32 constituencies.
The Chief Minister also spelled out the initiative of the State Government in uplifting the livelihood of the people of the State. He also apprised on various plans and other policy measures of the State Government which will be carried out in near future.
He also informed the gathering to abide the safety protocols of the State Government and asked all to follow the guidelines and Standard Operating Procedures in the collective fight against COVID -19 pandemic.
Hon’ble Minister for Rural Development Department Shri Sonam Lama in his address highlighted the schemes of the State Government for the larger benefits of the economically weaker section of the State. 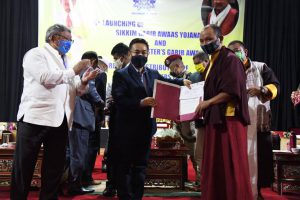 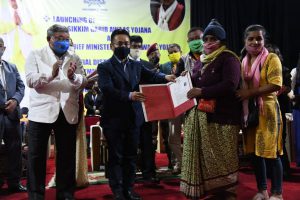 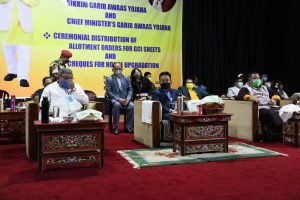